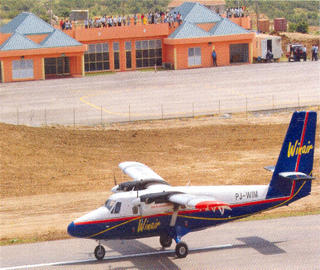 Montserrat held its inaugural flight (scheduled fixed wing) today the 11th July 2005. After an absence of 8 years since the Souffrie Hills Volcano interrupted scheduled flights. It was truly a momenteous occassion attended by dignitaries from other Caribbean islands and the European Commission. Winair, who won the carrier tender late last year was out with several vessels of their fleet.

On an architectural/engineering note the runway utilizes a structural system unlike any in the world with two embankments on either side at approximately 100m high made from compacted fill (done 196mm at a time) - a true wonder!
Posted by mad architect at 11:27 AM