cross your eyes and you may notice that the plans says, PLAY | LIVE | CREATE
Posted by mad architect at 10:23 AM 6 comments:

Sorry the last few days have been hectic...alas the world of architecture has been busy too

Starchitects in the News; Steven Holl in NYC. Read more here and here. And da Rocha in LA. And appropriate to those two dense cities, as well as new towns -

33 -- the number of mature trees used to construct a new 2,000 square foot house. Or you could do like Indonesia and plant 79 Million (in a day). Sort of gives new meaning to "green building," eh?

Makes you want to get away and be amongst the trees? Or from a little cottage in Negril? I just bought a house as well...its not solar, like his...nor is it as minimal as this
Posted by mad architect at 5:05 AM 1 comment:

Back in 2006, I had a series of email conversations with Eric Bunge, of nARCHITECTS a New York practice he runs with Mimi Hoang, for an interview series to be posted on this blog

mad: What motivated the start of nARCHITECTS?

Eric Bunge: We founded nARCHITECTS in 1999 in New York, and pretty much starting teaching at the same time. We had worked independently on various projects as far back as 1990, and together since 1995, moonlighting while working at other offices. Perhaps our choice of a name might reveal some of our early intentions: we chose the small letter 'n' as a sort of unstable symbol - one that can acquire any value, as with the integer in mathematics. On one level this choice is a reflection on naming itself - any name - even partners' last names - begins to acquire associations with the work. At another level we were interested in producing dynamic, flexible work - architecture that will somehow change.

mad: nARCHITECTS appears to be unconventional architectural studio, in the traditional sense, by the work you are involved with. What has allowed the practice to transcend between building, landscape, sculpture and structure?

EB: I can see how one would perceive our work in those terms - yet we don't see ourselves as artists or landscape architects - we have great respect for these disciplines, and think that beyond training and temperament, what distinguishes our work from these is our approach, methods, and ultimate goals.

We - maybe by default - see it all as architecture, or trying to approach architecture. The commissions we gravitate towards are ones that we can have built (like Switch Building), even it sometimes means building them ourselves (as with P.S.1, Windshape, and Party Wall). At this point in our career, the opportunities for building are spread across what might seem like various disciplines. But our goal is to design buildings - much of what we do is a laboratory in which we develop ideas towards that end. This is one reason we boycott ideas competitions, or steer away from projects that have a small chance of being built.

mad: Do you find creative constraints in transcending these conventional "architectural" forms?

EB: Yes. The most important step for us in every project is the definition of the design problem, which involves deciding who the Users are (what is their identity?), what the Site is (what aspects of a site do we respond to?), and ultimately therefore, what are the creative constraints.

mad: Has having such success in creating installations branded nARCHITECTS as a practice less interested in materializing traditional work, despite the desire to do so? Is this a big challege for the practice?

EB: I wonder if you could rephrase these questions, we have built what one might call traditional work, not necessarily less than our peers (~ 10 residential projects so far). The latest is a 7 storey residential + art gallery building at 109 Norfolk, almost complete. We also will be building a 100 acre streetscape project in Buffalo, now in schematic design.

mad: Mathematically, 'n' - speaks as more than an unknown but also includes the exponential increase, becoming rapidly greater in size; has nARCHITECTS sufficiently evolved to be more than a part-time effort? Is that the aim of the practice or to remain a creative outlet?

EB: not sure what you mean by " a part-time effort"; we have been a full service, full time architectural practice since 1999.

the interview ended on a sore note, and after a few missed telephone calls the conversation ceased with the exception of a congratulatory for architechnophilia being featured in the summer issue of MARK

here's another interview with nARCHITECTS
Posted by mad architect at 7:55 AM 1 comment:

Architects Gwathmey Siegel to expand Paul Rudolph's iconic Yale Art & Architecture Building. The 87,000 sf addition, being done in conjunction with Robert Stern - the dean of the school, is to serve as part of a $125 million dollar face lift of the original building. The renovation seeks to restore many of the interior spaces which had been altered over the years and the replacement of current fenestration in favour of windows closer to those designed by Rudolph. The addition in contrast to the brutalist exterior of the original will be clad in limestone and zinc, seeking to create a dialog with Rudolph's building.
Posted by mad architect at 5:19 AM 1 comment: 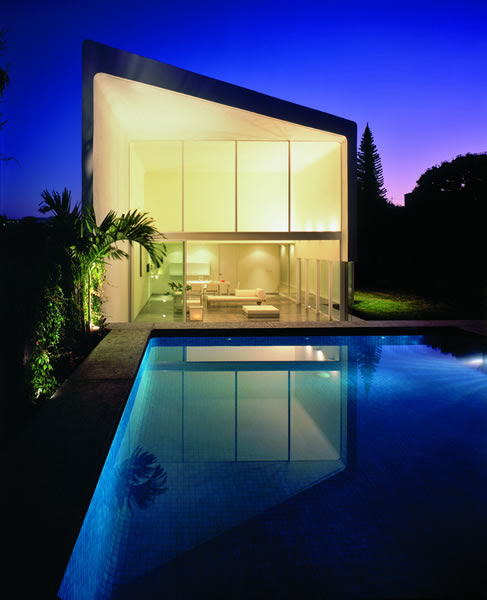 Icon Eye, the blog for the popular magazine, features a landscape project in Norway, where the National Tourist Route gave young, talented architects a chance to build bridges and rest stops in previously inaccessible but beautiful parts of the countryside. This one by CODE Architecture
Posted by mad architect at 5:18 AM 1 comment:

Two of the world's top architects Jean Nouvel (aka Dr. Evil) and Norman Foster have revealed that they will co-design an Italian town as reported by Building. The architects have opened up a joint office, Atelier Foster Nouvel, and will be planning the town of Santa Giulia, just outside Milan. The town for 12,000 residents and will include squares, parks, and an 8,000-seat conference center.

Foster & Nouvel have previously collaborated on the near brutalist London's Walbrook Square redevelopment.
Posted by mad architect at 9:53 AM No comments:

a bit morbid, but always good to see architects in the news

from HOK to Archizoom, how architecture firms name themselves

NEW BLOGS: The Measures Taken - Papers, articles and lengthier disquisitions by Owen Hatherley author of another blog, sit down man, you're a bloody tragedy

Alsop looks to transform Croydon
and a A Crowded Family Enters the Space Age
Posted by mad architect at 6:58 AM No comments:

Project7ten is now complete, via
Posted by mad architect at 6:09 AM 2 comments: 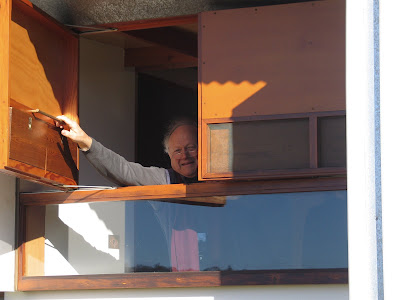 Glenn Murcutt will lead the Master Class which will again be located at, what has been called his “Masterwork”, the Arthur and Yvonne Boyd Education Centre, ‘Riversdale’, on the banks of the beautiful Shoalhaven River south of Sydney (completed 1999), followed by a week at the University of Sydney Faculty of Architecture.

The Master Class is a studio based program undertaking a design project centred on the landscape at ‘Riversdale’ addressing issues of cultural and environmental sustainability and culminating in a design presentation at the end of the second week. The program includes lectures, field trips and visits to houses by Glenn Murcutt and the other tutors.
Posted by mad architect at 4:10 PM No comments:

Conceptually this roof top addition, by Tonkin Liu & Richard Rogers for his son, reminds me of treehouse perched atop the limbs of a tree. More via NYT about urban additions
Posted by mad architect at 5:29 AM 2 comments:

"What use is a house if you haven't got a tolerable planet to put it on?"

Posted by mad architect at 5:09 AM No comments:

Mies & the Nazis - Guardian recaps the closing of the Bauhaus

Oscars to Get Their Own Museum - de Portzamparc to design a museum on the history of film
Posted by mad architect at 10:04 AM No comments:

Plug-in holiday home by Kisho Kurokawa. Check out a striking photo of the architect in his younger days.

and previously
Posted by mad architect at 9:15 AM No comments: 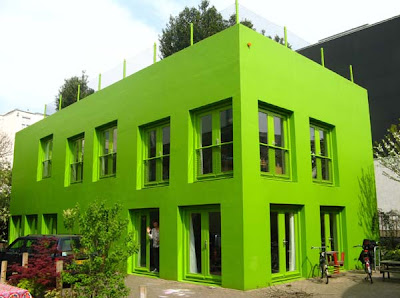 This bold statement for design studio thonik in Amsterdam, by MVRDV 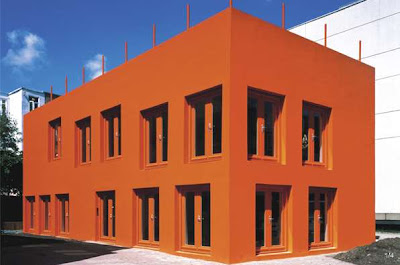 Critics say he lacks a style 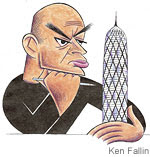 I don't believe in architecture that repeats itself in an automatic way. That's why each of my buildings is different in its details

With an ever increasing portfolio of projects worldwide, from Paris to Abu Dhabi, Jean Nouvel is set to make a hatrick in Manhattan. On the 20th anniversary of the completion of the Institut du Monde Arabe he shows no obvious sign of slowing down. Read more here.
Posted by mad architect at 5:13 AM 1 comment:

The Massachusetts Institute of Technology has filed a negligence suit against world-renowned architect Frank Gehry, charging that flaws in his design of the $300 million Stata Center in Cambridge.

more here and here, and here
Posted by mad architect at 5:51 PM 1 comment:

I know, its been a while since we did a furniture post

The Orchid Lounge Chair by Sebastian Gronemeyer
Posted by mad architect at 10:07 AM No comments:

The design proposes to have self-generating electricity created by the canopy roof; as well as a 2700 gallon rooftop water collection, and a waste composting system at the lowest level. The ZeroHouse is intended to find application in remote or ecologically sensitive locations, in places where typical construction would be unsuitable.
Posted by mad architect at 5:21 AM 8 comments:

A smørrebrød of features from some recently viewed architecture & design weblogs

A Daily Dose of Architecture - check out firm faces no.5, you will likely snort with laughter at the Halloween special.

also check out fabpics found on archinect, its a website of International Architectural Photography

also Architorture, a documentary about five diverse architecture students in a single studio filmed throughout the entirety of their thesis project.