But What I Really Want to Do Is Design

Lenny Kravitz, who owns some of the funkiest bachelor pads around and says if he hadn't been a musician he would have been a designer, this month announced the formation of Kravitz Design, a firm focusing on commercial, residential and product design. 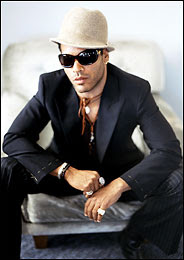 "When this tour ends in two weeks, it's going to be full-on designing," Mr. Kravitz said in a phone interview from his hotel in Paris. Without going into details of deals in negotiation, he said his plans include "a hotel complex in Vegas, a hotel project in L.A., some residential places for very well-known people."


Rick Marin writes in the New York Times about the celebrity fetish with design and architecture.

link via archinect
Posted by mad architect at 7:22 AM