A building can be designed to satisfy 'by the month' with the regularity of a provider. Or it can give satisfaction 'by the moment,' with the thrill of a lover 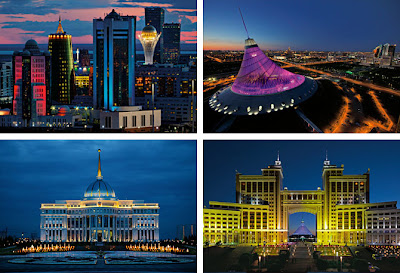 last word: Tomorrowland - Astana, the new capital of Kazakhstan.
Rich in oil and other mineral resources, Kazakhstan has lavished billions on the new capital, inviting some of the world's leading architects to showcase their work on the Left Bank of the Esil River, which separates the administrative "new city" from the older, mostly Soviet built district on the Right Bank. The results are eclectic, visually arresting, and not to everyone's taste. But love it or hate it, Astana is here to stay.
Posted by mad architect at 8:09 AM