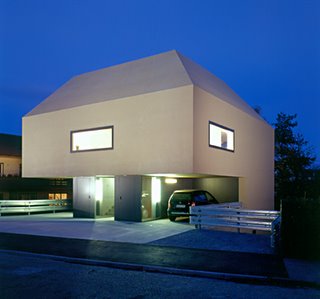 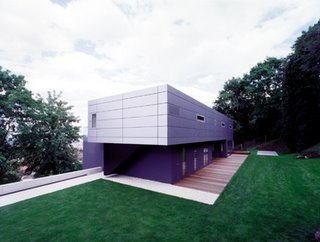 life got in the way of the fetish yesterday, sorry
Posted by mad architect at 8:38 AM No comments: Twin Valley house by Danze & Blood Architects. "The narrow house has three main levels, with decks on each, and at every orientation. A solid wall on the southern side's two lower levels shields the home from neighbors' view, with the wall opening up to a continuous ribbon window on that same side's upper level."

text from the Architectural Record
Posted by mad architect at 10:02 AM No comments:

P1160063
Originally uploaded by travelinlight.
Images of works completed by Rural Studio (late Sam Mockbee) on Flickr
Posted by mad architect at 9:04 AM No comments:

This is your last chance to submit your ideas for a better New Orleans. The design competition is sponsored by Architectural Record Magazine and McGraw-Hill Construction, in partnership with Tulane University School of Architecture. We have invited an international jury headed by Charles Correa. For more detailed information regarding the jury, please visit the Architectural Record website

apologies for busted link earlier
Posted by mad architect at 12:05 PM No comments:

Archifactory does everything from landscaping to interiors. Matthias Hermann and Matthias Koch founded the practice in 1999. Widely travelled, they are fascinated by the making of the modern city.
Posted by mad architect at 12:01 AM 2 comments:

Six diagonally placed building volumes that are staggered and of different lengths yet related to each other. The 4 building volumes give the external surroundings a dynamic form, reacting to the context. The views and sunlight are optimised for each flat and the obstruction of the views from the surrounding buildings are minimised.
Posted by mad architect at 12:45 PM No comments:

From desktop accessories and calendars to storage systems and compliments, Orange Skin has every home, office and lifestyle essential.
Posted by mad architect at 1:43 PM No comments:

David Adjaye, one of the country's brightest young architects, is working to create a more welcoming and user-friendly urban landscape.

read more from the observer

via archinect
Posted by mad architect at 8:20 PM No comments:

Brussels based architect and furniture designer Alain Berteau is interested in new behaviors patterns, functional flexibility, and typological relevance, the award-winning practice, has now extensive experience in both residential and commercial fields. Scalable by means of various interesting partnerships, Alain Berteau designworks is now commissioned to do large-scale private and public projects. Whispering Garden is a public art work next to Hotel New York in Rotterdam, that is based on the myths of Lorelei and the Sirens, luring the ships onto the rocks. The steel structure brings the whirls from Mucha’s hair-arabesques into a systemacy of crossings and mergings supporting green glass panels.

link via Interactive Architecture
Posted by mad architect at 11:29 PM No comments:

Posted by mad architect at 9:11 AM No comments: DSC02255
Originally uploaded by architechnophilia.
Archinect interviews Architect Renzo Piano, at the opening of the High Museum in Atlanta, Georgia
Posted by mad architect at 12:28 PM No comments:

The RIBA Competitions Office on behalf of the Newport City Council, the Newport Unlimited, the Welsh Development Agency and the Design Commission for Wales is please to announce the launch of a new International Open Ideas Competition. Submissions are invited from architects, landscape architects, engineers, town planners and urban designers for a new public space and its surrounding urban form in the Market Square area of Newport, South Wales. Collaboration between these and other disciplines (e.g. public artists) is actively encouraged, as are submissions from students who are registered on appropriate courses.

The Market Square Competition represents a fantastic opportunity to design a new northern gateway to Newport City Centre and a revitailsed connection between its historic core and the River Usk. Competitors will need to successfully resolve complex transport infrastructure issues and in doing so, generate the land to create an inspirational, contemporary civic space that people will want to use. As well as transforming the surrounding area into a more pedestrian-friendly environment, this will also strengthen the views and access to two of the City Centre’s most important landmarks - the Grade II listed Market Hall and the Castle.
Posted by mad architect at 8:47 AM No comments:

I Want to Change the World

Karim Rashid's visual standards of minimalist design with his fresh, colorful, sinuous, and sensual objects all captured on paper "I Want to Change the World" link via archinect
Posted by mad architect at 1:04 AM No comments:

I'm so in love

The Eva Solo Coffee maker, brewed on the original design of coffee - bean and water.

ps. my birthday is in April - someone please...I beg of you
Posted by mad architect at 4:23 PM 1 comment:

Glenn Murcutt (far right) hosted by the University of Newcastle will hold their annual international masterclass in July 2006, Australia. The cost will be Aus$7350, a 50% discount of two scholarships will be offered to applicants from " developing countries" with a low GDP capital.

From left Lindsay Johnston, Rick Leplastrier, and above Peter Stutchbury
Damn - they never offered me a discount when I went.

Also see the New Zealand Masterclass
Posted by mad architect at 11:10 AM No comments:

Architecture:
Many outsiders think this is a terrific, artistic career, but they don't realize how long it takes before an architect gets to design a building.

from Land+Living
Posted by mad architect at 6:39 PM 1 comment:

Can you take the heat?

HotSeat is a chair competition presented by OFS and Metropolis Magazine.

Design Criteria: Incorporate wood in materials usage, sustainable, progressive, accessible, aesthetically pleasing, technologically relevant, environmentally conscious.
Finalists will be awarded a trip to Dallas, TX to present their designs at the opening of OFS' Dallas Showroom. The winning entry will also have their design developed and incorporated into the OFS product offering

ok Superman... I know u want to save the world from poorly designed/constructed projects but u can only save one island at a time!
Posted by mad architect at 9:03 AM No comments:

A Daily Dose of Architecture 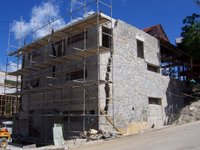 Just some photos of my recent travels to St Lucia via Antigua and back. enjoy

Martini bar...see below for results architects and client - yea, I know!

Luxury resort under construction - not melon

melon snagging - it was a working weekend back to my island

more here
Posted by mad architect at 1:09 PM No comments:

Miss Archy is dedicated to encouraging and supporting women to enter into and succeed in the architectural profession. Meet people in our forums, browse our articles and news items, enter a resume or job opening, and even shop for interesting merchandise.
Posted by mad architect at 12:48 AM No comments:

here's another blog on architecture called appropriately, Architecture & Morality
Posted by mad architect at 6:36 AM No comments:

Whilst farming towers are not new, by any means, rarely have they been done with such architectural elegance. This kind of architecture meets argiculture may satisfy some the demands of an ever growing society. Created by architect Pierre Sartoux, the example is dubbed the living tower.

my mother would have killed me if she knew I spelt agriculture incorrectly
Posted by mad architect at 12:28 PM No comments:

Okay again I'm going to be off for a few days playing the archi-tourist. Take a look at what I WON'T be seeing this time around. But hopefully I'll be able to fix that with views and locations to some rather important architecture from this end that need to be added to the mix.

Be back on the 9th
Posted by mad architect at 6:15 PM No comments:

Are you starting a new semester in architecture school? Do you have an urge to share your unique experiences with one of the largest architecturalaudiences in the world? Consider applying to be an Archinect School Blogger

Posted by mad architect at 5:01 PM No comments: 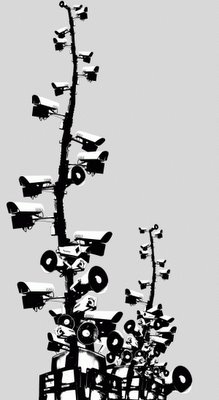 Museum of Modern Art in Warsaw

- the Museum has a unique location adjacent to the Palace of Culture and Science, and hence is endowed with a special moral and historical context;- the Museum building is an attractive structure;- the art collection groups high-quality, unique items;- the Museum intentionally projects its presence into the city’s public space.A Preliminary Concept for The Museum of Modern Art in Warsaw was prepared and adopted by the Museum Programme Advisory Board on August 28, 2005, and subsequently, on September 12, 2005, was recommended by the Board of the Museum as the departure point for further work on the program, as well as for preparations for an international competition for the design of the Museum.